For Anthem Homes, an enjoyable building experience goes hand-in-hand with smooth office processes and happy staff. With Lentune, Anthem have cut their invoice capturing time down to just 1-2 hours per week.

Anthem Homes have been building quality homes in the Waikato for over 20 years. They offer a wide range of house and land packages as well as design-build options—creating homes that suit the needs, budget, and style of their clients. 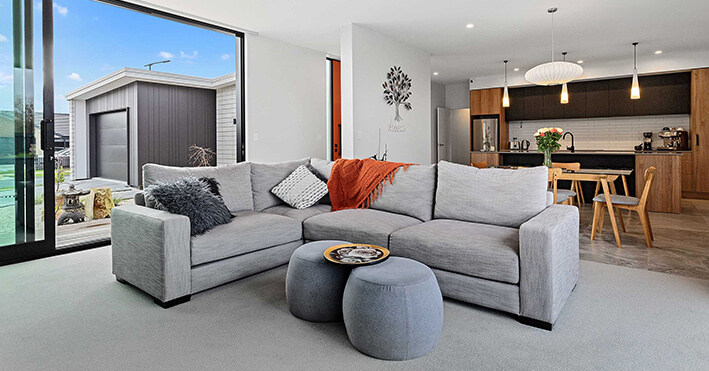 Building a new home can often be an ordeal. So for team at Anthem Homes, it’s crucial that their customers have a hassle-free and exciting building experience. Construction Coordinator Michelle Heiser, has a key role in making that a reality. “I’m here to support our team by ensuring that they have all the tools and materials required,” she says.

Part of Michelle’s role includes processing creditor invoices. Anthem Homes receive up to 500 creditor invoices each month, and Michelle was spending two days per week entering these invoices into the system. “It was tedious,” she laughs. “My role covers a great variety, which is what I love about what I do here. So spending two days doing the same thing was a little bit monotonous.”

For Finance Manager James Chapman, keeping the back office running smoothly is also key for a smooth build process. Anthem Homes’ approval process for accounts payable was very manual. Previously, invoices were being emailed to project managers for approvals. If there was an issue with a particular invoice, it was often printed out to be queried and written notes were added.

James was also keen to future-proof Anthem Homes’ storage system for invoices. Michelle was saving invoices manually to Dropbox as individual PDFs, which would make them hard to find in future years.

Choosing Lentune was an easy decision for Anthem Homes. They share a director with Foster Construction, who have been a Lentune customer for four years. “We knew that Fosters were really happy with Lentune,” says James. What appealed most to James was replacing manual processes with automation, and having file storage that would be easily accessible in the future.

Getting set up with Lentune was a great experience for Anthem Homes. Lentune paired them with Lorna, a dedicated Customer Success Specialist for the onboarding period. Anthem Homes appreciated the continuity and speed of working with just one person. “You’re not left to figure it out yourself,” says James. “There’s someone at the end of the phone or email who can help.”

Having a New Zealand-based team was also a benefit. “If you’re dealing with a company that’s US or UK based, there’s often the time zone issue which can be problematic,” says Michelle. “It’s nice having a local company; locally based.”

“In about an hour or two, I can capture the previous week’s invoices. The time saved is amazing.” 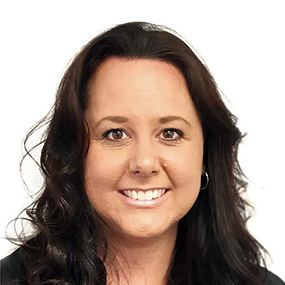 “Knowing what we know now, we would 100% implement Lentune again. It’s been awesome for our business.” 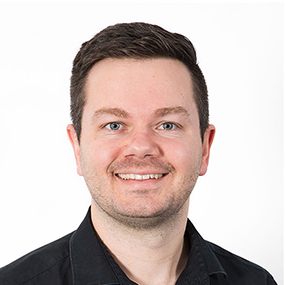 The biggest difference that Lentune has made to Anthem Homes is the time saved. “Before, I was spending two days capturing,” says Michelle. “Now in about an hour or two, I can capture the previous week’s invoices. The time saved is amazing.”

These time savings mean that Michelle isn’t neglecting her other work. “Nothing’s getting lagged behind,” she says. Michelle is using the additional time gained to implement other systems and to assist the project managers.
“If you look at the amount of time saved, Lentune’s good value,” says James.

Lentune’s improved accuracy too. “Lentune’s a clever system, where it identifies all the crucial information,” says Michelle. “There’s less chance of punching in errors.” If, for example, Michelle accidentally allocates an invoice to the wrong job, it’s not a problem. “It’s easy for James to flick it back to me to correct,” she says.

To plan their projects, Anthem Homes use Buildertrend software, which ties purchase orders (POs) to the schedule. However, they found the POs weren’t detailed enough. Lentune now works alongside Buildertrend to improve visibility. “I process purchase orders in Lentune, then export them and put them into Buildertrend,” says Michelle. “The subcontractors are really happy with it.”

Having all their invoices and POs in a central database, accessibly from anywhere, has future-proofed Anthem Homes’ accounts payable. “The ability to search for an invoice digitally will be useful in the future,” says James.

James is enjoying the level of control he has over accounts payable now. Lentune allows a custom approval hierarchy with multiple approvals, which puts James at ease. “I’m just more comfortable with the whole process,” he says.

With Lentune in place, Anthem Homes have streamlined their office processes. They’ve gained more time to go the extra mile for their own customers, and their staff are happier. It’s a win-win! 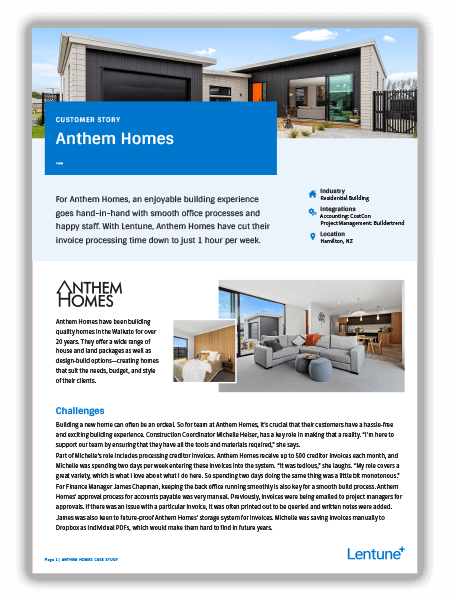